Genetic counseling is gaining its trending popularity with our increasing knowledge in Genetics. By assessing the relative risks a patient or his/her descendent have in developing or transmitting inherited disorders, Genetic Counselors provides patients great help in the planning of family, taking precaution to prevent diseases, as well as raising patients awareness in their conditions. In the process of interpreting patients medical histories and family histories, mathematics, and to be specific, Bayes' Theorem plays an important role in the estimation of the chance for the patient to development certain diseases.

Hemophilia is an X chromosome linked recessive hereditary gene disorder, and patients with that disorder have impaired ability in blood clotting, which means when they are bleeding, it will be hard to stop. Being an X-linked recessive disease, the frequency of male possessing hemophilia is higher than female, as when a male individual's genotype is XbY(b being recessive hemophilic, and B represents dominant normal clotting function), his phenotype will be hemophilic while for a female individual, only when her genotype is XbXb will she be phenotypically hemophilic. When a female individual's genotype is XBXb, she is only a carrier of the disease gene, and she will not exhibit hemophilic symptoms 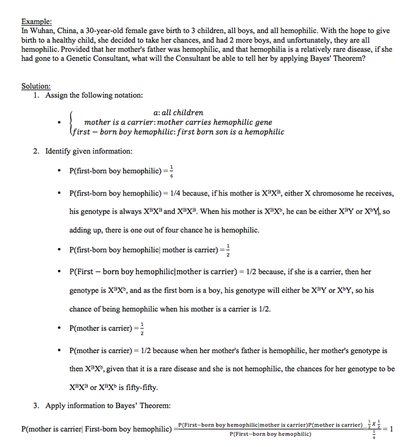 Main characterizations of Meckel-Gruber syndrome(MKS) include the malformation of central nervous system and Multicystic dysplastic kidney. MKS is an autosomal recessive genetic disorder caused by the malfunction of proteins MKS1 and meckelin. The genes that encode these proteins are MKS1 through 10, among which mutation in MKS1 and MKS3 are currently found to be directly linked to Meckel-Gruber syndrome. Like many other multifactorial inheritance disease, the mutations in different genes causes MKS to affects multiple biological functions, which results in the variations in MKS's resemblance features.

The diagnosis of Meckel-Gruber syndrome including the identification of the phenotypic features of the disease. Typical features of Meckel-Gruber syndrome include Dysplastic kidneys (MCDK), which are presented in 95% of the identified cases and is prenatally detectable with measuring whether there is a significant alternation of the level of amniotic fluid in the womb. Other features included Occipital encephalocele(OE) and postaxial polydactyly(PP), which are present in 70% and 65% of the cases. However in the normal population, MCDK occurs in about 1 in 2,000 babies born, and the incidence rate of occipital encephalocele is about 1 in 5,000 births, while the incidence rate of postaxial polydactyly is 1 in 1339 live births among Caucasians and 1 in 143 live births in Africans and African Americans. 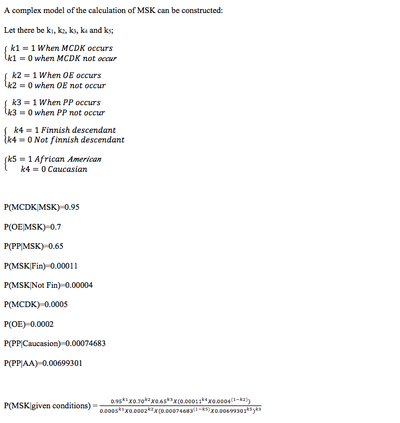 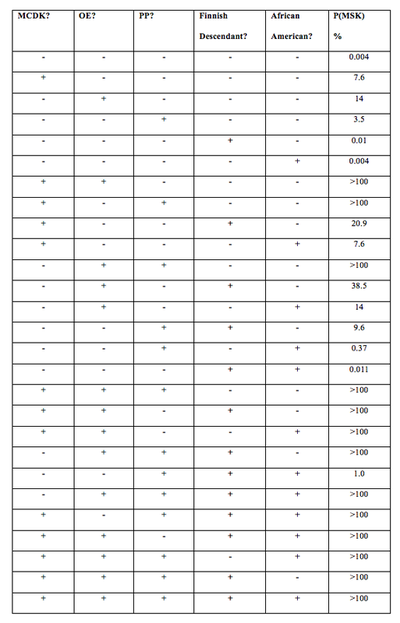 It is worth noticing that in many cases, the probability of MKS occurring has been calculated to be over 100%, which is not possible in reality. The cause of this result may be due to the embryonic lethality of certain mutations of MKS related genes. The probabilities of each features occurring given that the patient has MKS are not theoretical values, but rather statistics from real cases. When embryonic lethality takes place, the number of cases of MKS embryos without the three phenotypic features is never counted, thus resulting in the high values of P(MCDK|MKS), P(OE|MKS) and P(PP|MKS).

In reality, genetic counseling is never as easy as it appeared to be in this essay. While for one inheritance disease usually multiple factors need to be taken into consideration, in real life, various common diseases as well as the diseases that have occurred in the patient's family history need to be looked into. Constructing a single model to predict the chances for inheritance diseases can be very complicated, or even not quite possible. However, in the processes of trying to give a more accurate prediction, Bayes' Theorem plays an important role. Bayes' Theorem is very useful in helping the counselors predict the possibility of inheritance diseases to occur on the patient in the future, or the chance of the children to inherit certain diseases, and try to help them avoid the possible bad outcomes. Bayes' Theorem as well as our deeper understanding that we have in biology and medicine are getting us one step further from the process natural selection in eliminating the bad mutations. Nowadays, instead of blaming it to fate, we are getting better at avoiding the tragedy of losing children because of inheritance diseases. Bayes' Theorem has applications in other fields as well, including gambling, management, etc., helping people gain more profit. But in the field of medicine, it is doing good to the mankind, and making this world a better place.